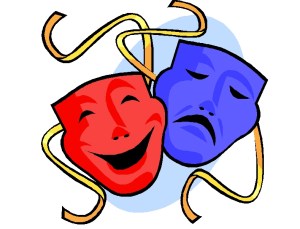 When I joined a theater group a few years ago, I already had experience writing novels and stories. The transition was not as easy as I’d expected. Although a novel can be adapted to a script and vice versa, the two are different art forms. At the time I decided it would be easier to create a new work. I remembered stories my girlfriend Arlys had told me of her weird on-line dating experiences, and voila, a musical comedy was born! I’ll save the rest of that story for an upcoming Self-promotion Sunday post.

The first rule of script writing is that your audience – producers, directors, and actors – expect it to be in a specific format. Using a word-processor template can make this easy. There’s a reason for using the archaic Courier font: it helps keep the timing consistent. As a rule of thumb, a page of dialog should last a minute on stage, but in practice that can vary greatly.

Secondly, converting standard prose to script can be challenging. Your pretty description and narrative must be replaced with scene and stage direction, which should be as concise and utilitarian as possible. How thorough you make these directions is a matter of personal style. Some famous playwrights, such as Pinter, use almost none. In any case, you will surrender much of your creative control to directors, actors, and set designers.

This conversion will be easier if you follow the cardinal rule of good writing: show don’t tell. In the theater, the writer shows through dialog and action. A good set can be helpful, but a play can be just as effective on a bare stage. If necessary, a character can play the role of a narrator, but this device should be used sparingly.

Comedy is a difficult genre in any form because humor is a personal thing. Unless you’re a natural, I suggest writing comedy with a co-author. The social dynamics of collaboration will help you come up with better, funnier jokes.

Music adds another layer of complexity. It’s good to have a song occur early in the scene, for maximum impact. Of course, the flow of the dialog will determine the ideal place for a song to occur.

Theater writing has its positive aspects, of course. Even if it’s not your primary mode of expression it’s a good exercise. It incorporates a social element that the solitary habit of writing normally lacks. Larger cities often have showcases for local talent, and they’re always looking for new works. These provide good opportunities for publicity and increased name recognition.

In this short post, I’ve barely scratched the surface of this topic. My primary message is not to underestimate the challenge of writing for the theater, but also to point out its potential rewards. As the saying goes, there’s no business like show business!

For some dramatic storytelling, check out my books on Amazon.com.