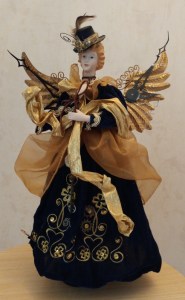 Christmas is one of the few times in the year when we Americans celebrate our nation’s European heritage. Though Christmas itself dates back over a millennium and some of our holiday traditions are ancient, many hail from the Victorian era. I believe this is partly due to the surplus of great literature from that time. This was one of the many benefits of the Industrial Revolution: a middle class with leisure time and surplus income. In other words, much of what we think of as a traditional Christmas is relatively modern, a set of cultural cliches which originated when the advance of technology brought much of our population above subsistence level.

The more religious elements of the holiday, such as midnight church services, nativity scenes, and Christmas plays are many centuries old. Some of the customs with pagan origins, such as kissing under the mistletoe and burning the yule log, are equally ancient. Many of our more secular Christmas traditions, however, date from the 1800’s.

* The poem “A Visit from St. Nick,” better known as “The Night Before Christmas,” helped shape our modern view of Santa Claus. It was published anonymously in 1823 and is usually attributed to Clement Clarke Moore but others claim Henry Livingston, Jr. as its author.

* In his 1812 edition of A History of New York, American author Washington Irving wrote of St. Nicholas soaring over the treetops in a flying wagon, which later became “Santa Claus” after the “Sinterklaas” of Dutch New Amsterdam.

* A Christmas Carol, by Charles Dickens, was published in 1843. This tale of avarice and redemption is still relevant in our modern age and has been staged and adapted dozens if not hundreds of times. It also helped establish turkey as the essential Christmas meal, though “Indian Chicken” as it was then called, was popular from the 1600’s onward.

* Christmas trees are an ancient tradition that began with German pagans and embraced by Christianity. They were popularized in both the British Commonwealth and America in the 1840’s by England’s half-German Queen Victoria.

* Christmas caroling, banned in England under Puritan dictator Oliver Cromwell, made a comeback when two writers made collections of old Christmas songs: William Sandys (Christmas Carols Ancient and Modern, 1833) and Davies Gilbert (Some Ancient Christmas Carols, 1823.) Many traditional songs such as “The First Noel” appeared around that time.

* Jingle Bells, one of our most beloved secular holiday songs, was composed by James Lord Pierpont in 1857.

* Fruitcake has been popular since cheap sugar became available in the 1600’s, but the Victorians upped its popularity by adding alcohol to the recipe. Sadly, this ingredient is absent from most commercial fruitcakes which may help explain its decline.

* Santa Claus parades first appeared in Peoria, Illinois, in 1887, originally as a parade of boats on the river. Macy’s Thanksgiving Day Parade, which also featured St. Nick debuted later, in 1924, and it also helped establish Black Friday as the beginning of the Christmas shopping season.

* The much beloved (and sometimes maddening) song “Twelve Days of Christmas,” was adapted from a Franco-English folk tune first published in 1780, but didn’t reach its current form until 1909.

* Currier and Ives – This 19th Century American printmaking firm produced popular and inexpensive lithographic prints, many of winter scenes, and was forever associated with Christmas in the lyrics of the 1948 song “Sleigh Ride.”