Valerian and the City of a Thousand Planets

Sometimes a good thing is worth waiting for. Fifty years after the debut of the French space adventure comic series Valérian and Laureline, these intrepid heroes have reached the big screen. Valerian is the creation of writer Pierre Christian and illustrator Jean-Claude Mézières. The series has won numerous awards but few people know it in the English-speaking world. Though I haven’t yet read this long running series (it would give Doctor Who a run for its money) judging by the movie, it must be pretty impressive.

Valerian follows the 28th Century adventures of government agent Major Valerian (played by Dane DeHaan) and his partner and love interest, Sergeant Laureline (Cara Delevingne.) The story’s exotic settings include the giant multi-species space station Alpha and the paradise world of Mul. The film is visually stunning and replete with the usual CGI spectacle. The action is non-stop but well paced, not needlessly frenetic like, for example, J.J. Abram’s recent Star Trek and Star Wars movies.

Though “City of a Thousand Planets” is not the most inspired title, I’m at a loss to think of a better one, except perhaps “Series that Spawned a Thousand Imitators.” As I watched the move, I was struck by the number of elements I’d seen in other sci-fi TV shows and movies, including Star Wars, Star Trek, Avatar, The Fifth Element, and Babylon Five. Since the Valerian comic series has been around longer than most of them (and almost as long as Star Trek,) we can guess who was plagiarizing whom. The Millenium Falcon, to name just one example, looks an awful lot like Major Valerian’s spaceship.

Overall, the movie was quite enjoyable but no masterpiece. It couldn’t live up to its amazing trailer, which features a pastiche of the movie’s most spectacular images set to the Beatles song “Because.”

The story is interesting, though not terribly original. I correctly predicted many of its plot turns, which is always disappointing. The main characters are likable though their acting is a bit flat at times. In fact, my favorite performance was by pop singer Rihanna as Bubble the shape-shifter. In particular, I found DeHaan’s youthful appearance jarring. He barely looks old enough to drive a car, let alone pilot a spaceship. The movie’s lowest points revolve around the romantic banter between him and Delevingne, which was at times painfully cliché. The action scenes made up for that.

Flaws aside, Valerian is still a must-see for any science fiction buff, especially Star Wars aficionados who loved the originals. I’d rate it 4 out of 5 stars. 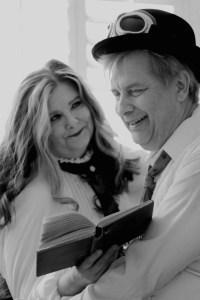 This coming weekend, Arlys and I will be appearing on two steampunk-related panels at Westercon 70 at the Mission Palms Resort in Tempe, Arizona. To celebrate, we are offering a special promotion for our new e-book, Professor Ione D. and the Epicurean Incident. This is the newest our series of steampunk adventures featuring our feisty heroine as she attends the First Epicurean Exhibition in London. This e-book will be available for download absolutely FREE on Sunday and Monday, July 2nd and 3rd. We make only one request: if you enjoy this book, please leave a review on Amazon. Even a sentence or two would be great. It would help us generate publicity and we would very much appreciate it. (Link)

Panels featuring Yours Truly are as follows:

“The Future of Steampunk in Writing,” with David Lee Summers
Sunday 11 AM -12 noon
David Lee Summers has written over a dozen science fiction and fantasy novels, including the “Clockwork Legion” series of Western-themed steampunk.

“Steampunk before it was Steampunk,” with Katherine Stewart.
A discussion of “proto-steampunk” in books and media before the term was coined.
Monday 5-6 PM

We hope to see you there!

If you don’t have a Goodreads account, get one! There’s lots of interesting opportunities for readers — including free books!

In this belated Thanksgiving post, I’d like to express my appreciation of the rights we still have in America. That is not to say that they come from the government, because I believe that freedom is part of the birthright of all human beings everywhere. Still, to the degree that I don’t need to fear incarceration for speaking my mind, for defending myself and my family, and for refusing arbitrary searches, I’m grateful to the stubborn pro-freedom heritage of my people.

We libertarians sometimes forget that there are a lot of countries that are more stupid and despotic than ours. Though there are certainly several nations with a freer press and better protections against the police, the vast majority are worse. Even those countries with close ties to America, with traits we admire such as sensible policies regarding drugs and sex, are often plagued with idiotic “hate speech” laws. For all that Americans can be smeared, demonized and boycotted for expressing an unpopular opinion – think Donald Sterling, Paula Deen and the Duck Dynasty family – you can’t be fined or arrested, as you could in many European countries, even the UK.

Nor can we be punished for questioning or mocking religion, as in most Muslim-majority countries, or for openly practicing or discussing gay lifestyles, as in Russia. Though the US government has put enormous pressure on whistle blower sites such as Wikileaks, our Internet is not (yet) censored, as in China. In many places, a person can be arrested for questioning the official accounts of the Nazi Holocaust. Personally, I have no desire to deny such atrocities; people who do so are delusional. Yet such laws provide unintentional motivation for neo-Nazis, and can easily chill honest scholarship, in much the same way that Turkey’s laws against defaming the nation prevent people from discussing the Armenian genocide.

Unlike many nations, the US does not have a military draft, and we should be very thankful for that. Conscription is truly a form of slavery that allows governments to pursue aggressive wars despite public opposition, forcing young people to kill and be killed. Even Switzerland, one of the most relatively free countries on Earth, forces its male citizens to be part of its military reserve – though due to that country’s enlightened political neutrality, the mandate is not nearly as onerous as it could be.

Finally, though the police in America can certainly be oppressive and abusive, they have not yet reached the level of corruption as in Mexico and many other places. We’re not yet to the point where a group of college students protesting peacefully could be abducted and murdered en masse. Though Mexico still has its good points, the government’s draconian gun laws are a great atrocity that has, in part, allowed the drug cartels to run roughshod over the people.

As Americans we must appreciate the rights we have left, and use them on every possible occasion. We should not censor ourselves out of fear; we should aggressively defend our ability to speak out. If a “state of emergency” is ever declared, we may be among the first to be detained, but the risk is worth it.