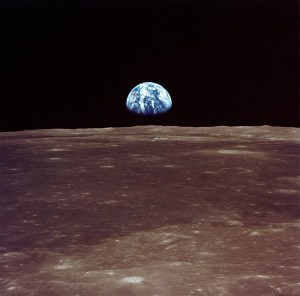 Earthrise over the Moon, photographed by the Apollo 11 astronauts, from history.nasa.gov

One of the greatest disappointments of my life has been the stalling of space exploration. Considering the rate of the Apollo moon missions in the 1970’s, I expected we’d have a permanent base there by now. Unfortunately, so much of humanity’s resources have been wasted on war, both military and economic, that it’s crippled our efforts to get into space. I believe it will happen eventually, but probably not in my lifetime.

Why should humans go into space? As mountaineer George Mallory said about Everest, “because it’s there.” There are tangible benefits as well, which include scientific discoveries, zero-G manufacturing technology, mining resources in space, and the ability to avert (or survive) a planetary emergency. We’ve already benefited from sending machines into orbit. Satellites for weather, communications, and research have revolutionized our lives.

Because government priorities are driven by the whims of politicians and the fickle attention of the public, NASA and other government agencies are not the answer. The private sector needs to play a major role. Private business in space got off to a slow start, in part to government regulations and the concern that space travel could be weaponized. Since the end of the Shuttle program, and the collapse of America’s Soviet competitor, we’ve seen the birth of a free-enterprise space race. Companies such as Orbital, SpaceX, Blue Origin, Virgin Galactic and dozens of others have taken up the torch.

Even without the burden of government taxation and regulation, the economics of space exploration are still daunting. A 2011 estimate of the cost to get 1 kg of material into low earth orbit was approximately $1000. New technologies such as magnetic rail guns may be helpful (for inert material rather than living things), but escaping the earth’s gravity will remain expensive for a very long time.

The microgravity that makes space exploration so interesting to engineers is also a hazard to the long-term human habitation of space. Rotating space stations are a staple of science fiction because it’s the best way to simulate gravity in orbit. Yet we have not yet created anything of the sort. Once again it’s a matter of resources. To be useful as a human habitation, a rotating station would have to be quite a bit larger than anything we’ve built so far, including the International Space Station. It would also have to be strong enough to stand the stress of constant rotation.

I have hope that mankind will eventually break such barriers. Increased funding to NASA could be a carrot to the aerospace industry as America withdraws from its unproductive interventions abroad. As the US and Russia settle their differences, I look forward to more cooperative ventures between the two countries. But for the most part, the government needs to get out of the way. It’s time for space enthusiasts to put their money where their mouths are and invest in companies that will help us break the shackles of Earth.

If you like the mysteries of space, you’ll enjoy my story Found Pet, available from Amazon: https://www.amazon.com/Found-Pet-Vaughn-Treude-ebook/dp/B018H41FRM