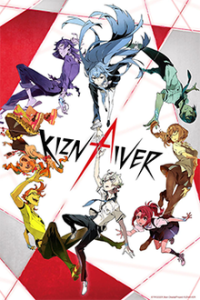 Kiznaiver, one of the spring 2016 offerings of the Japanese animation studio “Trigger,” just aired its final episode last weekend. It was better than I expected; I’d rate it at least 4 stars out of 5. Trigger is most famous for the cult favorite Kill La Kill, an over-the-top satire featuring lots of gratuitous (near) nudity and violence, the premise being a bizarre conspiracy to rule the world through malevolent clothing. Kiznaiver is nowhere near that edgy, but it maintains Trigger’s characteristic quirkiness in a show that has a much broader appeal.

The story takes place in the fictional Sugomori City, which was founded years earlier to advance the utopian goal of the elimination of war and violence. Though this idealistic vision seems to have been forgotten, a small group of scientists continues to conduct psychological experiments on unknowing, unwilling subjects. They select seven high school students to receive the “Kizna” (Japanese for “connection”) surgery, which leaves no visible sign except a strange mark on the arm. Its purpose is to connect the study’s participants, so that if any of the seven feel pain, they all do. Furthermore, the sensation is divided in intensity as it is distributed among them all. A side effect is to lessen any injury that one of them suffers. In the first episode, one of the seven falls head-first down a long flight of stairs and suffers only a minor concussion.

Despite its weird science-fiction premise, the show’s intriguing characters save it from being dry and contrived. The seven test subjects begin as anime stereotypes: Yuta the playboy, Tenga the thug, Chidori the nice girl, Nico the cute lolly, Honoka the ice-cold bitch, Hisomu the eccentric freak, and Katsuhira the blank-slate protagonist. Though they are classmates, they have nothing else in common. The Kizna experiment forces them to associate and to overcome numerous trials together. In the process, they share their hopes and fears and reveal the true depths of their personalities. The eighth major character is the beautiful, enigmatic Sonozaki, a fellow teenager who acts as their handler. The show hints at her past association with Katsuhira, which he remembers only through disturbing dreams. Both were involved, as small children, in an earlier experiment that had tragic consequences.

As for the seven test subjects, there’s a constant tension between those who crave acceptance and companionship from the group (Nico), those who reject it (Honoka) and those who just don’t care (Katsuhira.) While the teenagers deal with the burden of shared physical and emotional pain, they become involved in a complex romantic polygon, in which everyone’s love interest is focused on someone else. The most prominent character arc is that of Katsuhira, a boy who feels little emotion and no physical pain, who learns to rediscover his humanity.

For all the heavy moral and ethical questions that Kiznaiver explores, it is never preachy. No one is totally good or evil. The emotionally damaged Sonozaki has a good reason for her lack of empathy. Even the experiment’s ringleader, Sugomori’s scheming mayor, and the two high school teachers who serve as his bungling hench-people, seem to have good intentions. As with most anime series, the show has comic elements, including the omnipresent mascots called Gomorin. These anonymous city workers wear suits of bizarre lumpy creatures whose distorted faces resemble the “Kizna” mark. The show’s worst feature are its groan-worthy episode titles, including this gem: “Wahoo, It’s a Training Camp! Let’s Step in Deer Poop and Have Pillow Fights! Go, Go!”

At times, Kiznaiver borders on melodrama, but somehow the show maintains a balance between message and entertainment. I see it as an allegory about what it means to be human, the importance of community, and the ways people deal with loss. Political animal that I am, I couldn’t help drawing parallels to political and economic systems. The Kizna project, by forcing people to share both physical and emotional pain, is a lot like socialism. Both ideas have noble motivations that seldom work out as intended. As for the show’s actual message, that’s for the viewer to decide.

Kiznaiver can be seen on Crunchyroll.com and numerous other anime websites. Kiznaiver promotional image is from wikipedia.org.