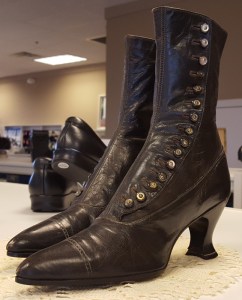 I’m sure you’ve heard the phrase “two left feet” to describe someone who’s awkward or clumsy. Back in the 1800’s, this was, in a way, literally true. As late as the 1850’s, the two shoes in a pair were interchangeable. The owner had to break them in order for them to be wearable. Most shoes and boots at that time came in only two widths, slim and “stout.” Since they were handmade, though, a cobbler could adjust or customize a shoe to fit.

The Victorians were much more comfortable than those of previous eras because shoes were finally being made differently for left and right feet. William Young is credited for perfecting the process in the early 1800s, although it didn’t become the norm until much later.

Around the same time, it became acceptable for women to wear the same kinds of boots that men were wearing. Women’s boots would feature intricate embroidery, and lace of many colors often dyed to match one’s dress or gown. They were made from rubber and leather, and were heeled in a different way than men’s. With scalloped edges, patent leather, and suede, these stylish boots were not the kind their owner would want to wear in mud. Fashion boots still survive to this day as a lasting testimony to the Victorian Era.

Well-bred women took great pride in their feet and wanted them to look as small and dainty as possible. Ladies’ magazines of that time would instruct, “The foot is one of the chief points by which a woman’s social position is judged. If the feet are small, well-shod, and prettily used in walking, they add an additional charm to the appearance, and are an indication of high standing and … of gentle birth.” It was crucial that women’s feet looked as presentable as the rest of their outfit. (I was unable to find the exact source for this quote.)

Footwear has seen many changes over the years, in particular with the introduction of different shoes for left and right feet in the mid-1800’s. This gave way to the elegant styles of the Victorian era, which remain popular to this day.