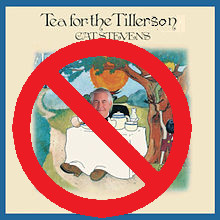 Former Exxon-Mobil CEO Rex Tillerson, Donald Trump’s nominee for Secretary of State, was on Capitol Hill yesterday for confirmation hearings before Congress. Given the general hysteria over Tillerson’s business ties with Russia, I thought at first he’d be a good pick. Nothing is more important than repairing America’s damaged relations with Russia. It’s a powerful country, rich in resources, with an educated population and a shared opposition to Islamic terrorism. Most importantly, it has nuclear weapons, so to attack it would be suicidal.

Unfortunately, the US government is lousy with “exceptionalists” who deny that Russia has the right to defend its own interests. They’re apoplectic that Moscow has opposed the illegal installation of hostile regimes in two of its former allies, Ukraine and Syria. The neo-conservative anti-Russian crusade is not about “human rights.” If we cared about that, we wouldn’t support countries like Saudi Arabia that murder gays and enslave women.

As for Tillerson, he’s more of a war-hawk than his detractors thought. He supports our pointless sanctions on Russia as if either Crimea or Aleppo was any of our business. Furthermore, the accusations of Putin “hacking” the Presidential election are just that, accusations, unsupported by credible evidence. Even if the Kremlin DID hack the Democratic Party’s server, the released information was true and relevant to the voters’ decision, so the leak was a public service.

Perhaps Rex is repeating this neo-conservative rubbish so the clowns in Congress will confirm him. I hope that’s the case, but I have my doubts after hearing his belligerent remarks about China. What gives us the right to tell a sovereign nation what it can and cannot do in its own coastal waters? Open navigation in the South China Sea is critical for Beijing’s survival. Despite that fact, Rex insists that China must stop building artificial island bases and threatens to send our Navy to kick them off.

Is this man insane? It’s acceptable to make war for our own national defense, but not to attack the vital interests of another country. China has every right to defend itself and having come late to the party, there are no leftover islands for it to occupy as bases. To Beijing’s credit, these built-up shoals were not inhabited. They’re not conquering and coercing native peoples as we did with Guam, Samoa, Hawaii and Puerto Rico. Even Diego Garcia, which the US rents from the UK, was stolen from its native population.

Why do so many powerful Americans continue to frame other nations’ defensive moves as aggression? It must be psychological projection because the US is second to none at portraying imperialism as defense. We needn’t accept this nonsense. Congress should reject Tillerson’s nomination, not because he’s (allegedly) soft on Russia, but because he’s unhinged, unfair, and unbalanced on China. We don’t need another conflict, especially one that could escalate into a nuclear war.

If you like political intrigue, you’ll enjoy my novel Centrifugal Force.