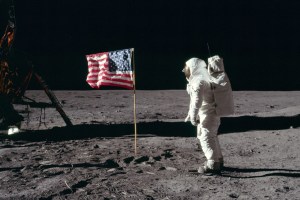 Above, photo of Buzz Aldrin on the lunar surface.

One of the most momentous events in human history happened fifty years ago today. On July 20, 1969, Neil Armstrong became the first human being to set foot on another celestial body. It should have been declared a national holiday – hell, an international holiday – but people have never been very good at grasping what’s truly important at the moment it happens.

Before I go any further let me say that all you Apollo 11 deniers are completely and utterly mistaken. Like you, I’m a conspiracy theorist, but I draw the line at believing that significant events witnessed by hundreds or even thousands of people can be successfully faked. Sometimes they may be misinterpreted for propaganda purposes (such as the destruction of the battleship Maine in Havana harbor) but there always must be some basis in reality. Furthermore, if the US government felt it needed to fake a moon landing, why would it do so six times?

The tragedy, the travesty, the monstrous crime was that we stopped going after trip number 6. I emphatically disagree with people who say “we have too many problems here on Earth to solve first.” Fie on this defeatism! With that attitude, people would still be living in caves, because there have always been social and economic problems. There are a number of government expenditures we could sacrifice rather than space exploration such as corporate welfare and military intervention overseas (which is, to be technical, another form of corporate welfare.) Nor do we need to give “foreign aid” to third-world dictators who just stash the funds in their Swiss bank accounts. Fiscal conservatives often mock scientific research as a waste but the opposite is really the case. Science is more significant, more uplifting, and more beneficial than just about anything else the US government supports. It’s most of that other stuff that’s wasteful.

What the Apollo program proved is that we Americans can do great things and that people of all walks of life can play a part. Yet I don’t expect mankind’s greatest achievement to be celebrated with the enthusiasm it deserves, because it doesn’t fit the current year’s grievance-based narrative of identity politics. It’s just too darn uplifting, Too many of us want to be angry about something. To those people I say, search for a video of President Kennedy’s speech at Rice University where he challenges the nation to go to the moon. I dare you to listen to Kennedy’s speeches (especially his Inaugural Address) and not get choked up. I’m not ashamed to admit that I did.

Today is the fiftieth anniversary of a great accomplishment by heroic Americans. I may be disgruntled at times, but today is not one of them. Today I am proud to be an American.