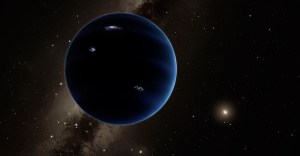 It was a sad day in 2006 when our beloved 9th planet Pluto was demoted to a dwarf planet. Pluto was always the problem child, but we loved it anyway. It was the smallest planet, whose orbit was inclined at 17 degrees to all the others. Even more troublesome, its orbit crossed that of Neptune, so that for part of its 300+ year orbit it was actually the 8th planet from the sun, rather than the 9th. (It will never collide with Neptune, thanks to that tilted orbit.) To top it all off, it was discovered here in Arizona.

Unfortunately, the rebel planet had to be demoted with the discovery of Eris and a half dozen other large objects out in the Kuiper Belt – because if Pluto remained a planet, all these newcomers would be. It was not easy to break the habit of thinking of 9 planets. The “Church of 9 Planets” in Heinlein’s Stranger in a Strange Land would need a new name. Therefore it was a relief to hear that there was probably still a 9th planet out here – and this would have to be a decent size, several times bigger than Earth.

It’s ironic that Michael Brown, the astronomer who discovered Eris who jokingly calls himself “Pluto killer,” who along with colleague Konstantin Batygin, proposed the existence of a new Planet 9. Their reasoning was a suspicious alignment in the orbits of Kuiper-belt planetoids. (This is the same reasoning Percival Lowell used to initiate the search for Planet X that ended up finding Pluto.) Something massive had to be shepherding them into similar orbits, and they were too far away for Neptune to be responsible. Since then there’s been a major effort to find it, which is a challenge. It’s so far out and so dim it taxes the abilities of our biggest telescopes to find it.

Of course, the crazies have come out of the woodwork. I’ve seen numerous Internet articles proclaiming it as the legendary Nibiru, or death star, the dark planet that periodically sends comets toward the Earth causing mass extinctions. The idea of the Sun having a distant unseen companion is actually a respectable scientific theory, but the theoretical Planet 9 doesn’t seem big enough to fit that bill. Nor do astronomers expect any imminent threat to our planet.

The other issue is, what will we call this new planet? By convention, trans-Neptunian objects are named, like Pluto, after gods of the afterworld. (Eris is an exception, but the “goddess of chaos” theme was quite appropriate to what its discovery did to the world of astronomy.) Perhaps we should take a hint from Herman Melville and call it Ishmael.

Continue reading on my blog at

If you like reading about undiscovered planets and alien critters, you’ll like my books. Check them out on Amazon.com