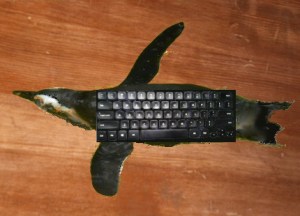 The movie Naked Lunch would not have been nearly so dark if, instead of turning into a cockroach, the protagonist’s typewriter would have turned into an adorable penguin. So in honor of the second installment in my Linux posts, which deals with image manipulation programs, I decided to create one. Unfortunately, due to my lack of artistic talent, it ended up looking more like penguin roadkill than anything – but you get the idea.

For what it’s worth, I did the attached illustration with the GIMP, an open-source image editing program similar to Photoshop, without the hefty price tag. The name is an acronym, GNU Image Manipulation Program. (The word “Gnu,” which you’ll see applied to a lot of things Linux, stands for “Gnu is Not Unix,: a bit of computer geek humor.) Like many of these open-source programs, it has versions for Windows and MacOS as well as Linux. The GIMP has a steep learning curve, but you don’t need a manual, just Google. There are thousands of fellow GIMP users out there who are more than willing to help you. Like any serious imaging program, it lets you work with layers and transparency. I have used GIMP for finalizing the cover art for my last two books. Once the artist has completed the illustrations, I use it to add the title and author name, the back cover blurb, and the lettering on the spine. GIMP saves images to its own format, XCF, but you can export things as PNG, JPG, and all other major formats. When I imported the Fidelio cover art from a Photoshop file; it wouldn’t display correctly, but I was still able to extract the layers and paste them into a new document. All in all, the GIMP is a very powerful program.

Inkscape is another image program I’ve recently started using. Unlike GIMP, it’s not a photo editor but a vector drawing program. It’s more equivalent to Adobe Illustrator or Corel Draw. Vectors are not fixed-size pixel drawings; rather they’re abstract mathematical objects that can be scaled up or down with ease. I’ve got a lot of experience with the latter because I use it in my day job to create files for our laser engraver. Therefore I was looking for an equivalent program I could use on Linux. The first thing I tried was to import a Corel Draw file. It was only partially successful, as the “hairline” (zero width) vectors did not come across. It does far better if you export from Corel to SVG format. Inkscape does, however, have its own hairline vectors, a necessity for drawing “cut” lines for the laser. As with the GIMP, Inkscape also has versions for Windows and MacOS.

In the Linux world, one of the paradigms seems to be, why use an existing application when you can create your own? Consequently there are many open-source graphics programs to choose from. The ones I mentioned above are the ones I use the majority of the time. However, I can’t neglect mentioning a handy little program called xfce4-screenshooter, which in Ubuntu Linux pops up every time to press the Print Screen Key. It shows a thumbnail of your screen image, and gives you the option of saving it, copying it to the clipboard, opening it in a graphics viewer or editor, or posting it to ZimageZ, a free hosting site for images and photo galleries.