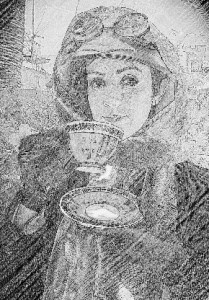 Photo by @ for book 1 of the Steampunk Adventure Series of Professor Ione D.

Hats were crucial to a respectable appearance for both men and women in Victorian times. To go bareheaded was simply not proper. The top hat, for example, was standard formal wear for upper- and middle-class men. Women’s hats were designed to match their outfits and changed greatly over time. From the top hat and the bowler to a plain straw hat, women redesigned the “manly headwear” of the time to make artistic one-of-a-kind creations.

A woman’s hat in the Victorian era portrayed the very essence of who she was. Many women had a say, if not a hand in their design and construction. Milliners with the experience to please their customers with original designs were highly sought after. Most hat shops were women-owned and operated. Their original creations could cost anywhere from $8 to over $30, which was an extravagant sum at the time.

In the early to mid-1800’s, voluminous skirts held up with crinolines, and then hoop skirts, were the focal point of the female silhouette. To enhance the style without detracting from it, hats were modest in size and design. Straw and fabric bonnets were the popular choices. Poke bonnets, which had been worn during the late Regency period, had high, small crowns and brims that grew larger until the 1830’s when the face of a woman wearing one could only be seen directly from the front. They had rounded brims, echoing the rounded form of the bell-shaped hoop skirts. 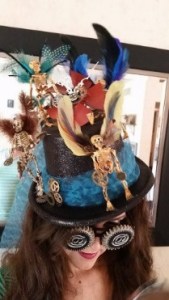 Now in the 21st century, zteampunk couture has resurrected these wonderful fashions! This science fiction genre and subculture have had the amazing ability to combine the romance of the Victorian era with steam-powered gear-driven vehicles, elaborate weapons and all types of gadgets. Only in the world of steampunk can a girl be coy, sexy and deadly!

In the second book of our steampunk series, Professor Ione D. and The Epicurean Incident, the ladies’ hats are remarkable and match the characters’ personalities to a T. You must read this amazing adventure to discover which lady wears which hat. This exciting novel is scheduled for e-book release on Amazon on May 24th, 2017, Queen Victoria’s 198th birthday.

* Slogan is from a hat company advertisement, circa 1897 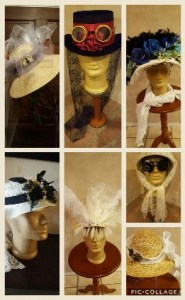 Photo Collage by @, Hats created by @ for the “Ione D” Steampunk Adventure Series by Vaughn Treude and Arlys Holloway.

Please peruse my other articles on Victorian Fashion, cooking and all things Steampunk on vaughntreude.info.