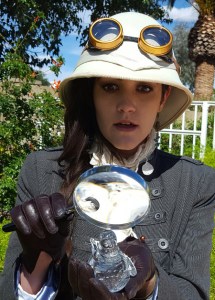 I’ve always enjoyed writing, but it’s been more fun since acquiring a collaborator, my amazing friend and partner Arlys Holloway. Though at the time she had little writing experience, she has proved to be a very capable co-author. Our character “Ione D” was her idea, as part of a Facebook campaign she devised to promote my steampunk novel, Fidelio’s Automata. Ione’s name is derived from the middle names of Arlys’ mother and father. I immediately fell for the character and decided that she had to star in her own series.

As a man, writing in first person for a female protagonist has been challenging for me. Arlys has been an incredible help, editing and rewriting my draft dialog from a woman’s perspective. Creating this series was partly a marketing move since these days women dominate the audience of avid readers. Though Ione is quite progressive for her time, to our sensibilities she’s a very old-fashioned and proper girl. We felt this would make Ione a refreshing change for the people of our cynical modern era.

Our first Ione D story, Miss Ione D and the Mayan Marvel, takes place in the 1890’s as the 19-year-old Ione moves with her parents to Guatemala, where her father has been appointed the deputy to the US Ambassador there. There she visits the ancient Mayan ruins of Tikal, makes an amazing discovery, and uncovers a sinister plot. Our second book takes Ione back to London, the city where she spent much of her childhood. She’s attending the first Royal Epicurean Exhibition, a pet project of the new King Edward. His Majesty aims to rehabilitate the image of English cuisine, featuring a fiercely competitive cooking contest. We’ve been working on it diligently and expect to release it early next year.

Another of our projects is to produce a paper edition of the Mayan Marvel book. Since as a novella it is shorter than a typical book, we plan to supplement it by including artwork at the beginning of each chapter. This project will hopefully be completed in early 2017 as well.

I’d like to remind readers that I haven’t given up my plans to publish a sequel of Fidelio’s Automata, called Fidelio’s Insurrection. The Ione D project has delayed my original plans to get to it next year, but I’ll get to that correctly.

Continue to check out my Sunday blog posts for news of another opportunity to win free books and swag from Nakota Publishing (that’s us!)