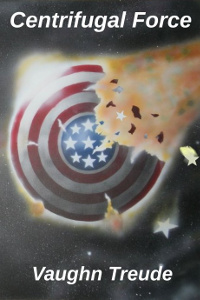 Three years ago last month I published my first book, the agorist science fiction novel Centrifugal Force. Though I hate to toot my own horn (there’s some false modesty for you) many of the things I wrote about in this book either have come to pass or are in the process of doing so. The major difference is that Centrifugal Force dealt solely with North America, and these phenomena have been global in scope.

As I predicted in my book, on-line business models are replacing and bypassing traditional regulated industries. Examples of this are Uber, Airbnb, and the online music and publishing industries. Unlike my fictional scenario, these are currently above-ground, legal efforts. However, competing institutions (such as taxi drivers’ unions) are striving to outlaw Uber, and rapacious cities are imposing their exorbitant hotel taxes on Airbnb participants. There’s no reason these businesses couldn’t exist underground, on a peer-to-peer basis. This will become more likely if the current economic situation worsens.

Continued, escalating acts of “terrorism” are giving governments an excuse to crack down on what little freedom we have left, such as free speech, freedom of movement, and financial privacy. The difference from my novel was again that terrorism has been a world-wide phenomenon, particularly in Europe and Africa. France takes the place of the despotic fictional US, where Joel Walter is forced to go into hiding. Since the Paris 11/13 attacks, the country has closed its borders and declared a state of emergency. Thankfully this hasn’t come to America yet, but I’m sure that our government is only one major terrorist attack away from doing the same.

Centrifugal Force featured the Undernet, an unregulated pirate alternative to the Internet. In real life we have the Dark Web and the notorious Silk Road drug marketplace. My book had E-barter, we have Bitcoin and other digital currencies. Politicians are simply apoplectic about these developments, and are even making noise about outlawing encryption. I was not surprised by the draconian punishment meted out to the Dread Pirate Roberts, though in my opinion, he’s a hero! Yet I believe the government’s efforts will fail in real life as they did in the novel.

In my book, several characters went underground to escape harassment or prosecution, staying in the US because of the difficulty of crossing the border. In the real world, many such activists have gone overseas, for example Edward Snowden in Russia or Glenn Greenwald in Brazil. Probably the most analogous real-life equivalent to Nephi Snow’s hacker network is Anonymous – assuming this group isn’t, as many claim, a CIA front.

Secession is a major theme of my book, because I believe this is the most plausible way to deal with the arrogant, rapacious, unaccountable American Empire is to break it up. Considering the roadblocks thrown at any serious reformer (such as Ron Paul), working “within the system” is not an option. Again, this has come to pass in Europe, with Catalonia seceding from Spain and Scotland almost leaving the UK. Here in America, a more current controversy is state nullification of Federal law, which causes many a progressive to shriek in outrage. The recent round of secession petitions at whitehouse.gov – and yes, I signed one for Arizona – gave me cause for hope. This might become more realistic if our Kenyan President keeps trying to rule this country by decree.

Other predictions include surveillance drones becoming commonplace (obviously true) and organized criminals posing as police to rob their victims. The latter seems largely confined to Mexico, but given the lawless behavior or police in many parts of the US, I expect it’s only a matter of time. Has political correctness gone crazy? Check; to the mainstream media, government opponents are evil racists. Also, we have seen curfews, like the one in Boston after the Marathon bombing. This one’s a no-brainer: anti-smoking fascism has definitely increased. Thankfully, though, we haven’t yet seen the activation of FEMA camps. I expect the Federal government will need to take a different approach to detainment of its enemies, due to the justifiable paranoia of the libertarian and patriot communities.

On the other hand, I was wrong about the following:

Mr President, everybody is talking about your address to West Point graduates. Republicans and other neoconservatives are upset because you showed an insufficient degree of blood lust. Anti-interventionists like myself are upset because you persist in keeping America in its role of global policeman. I’m aware that you Democrats seem to have a psychological need to prove you’re as “tough” or more so than the Republicans. But why? Let me humbly offer a suggestion. You can be much tougher by doing a 180 degree turn and, in the manner of statesmen from George Washington to Robert Taft to Ron Paul, renounce foreign entanglements completely.

This is, after all, one of the main reasons the American people elected you in 2008, because we were already weary of George W Bush’s constant war-making and intrusions on our civil liberties. Not only that, but you promised us “one of the most transparent administrations ever.”

Here are my top 10 suggestions:

1. End all US military operations in the Islamic world, including support of rebels in Syria and the deployment of “advisers” in Afghanistan, thus removing a major motivation for terrorism.

2. Announce an end to the use of weaponized drones, with a pledge to never again to deploy them absent a Congressional declaration of war.

3. Issue sweeping restrictions on NSA spying, as required by the Bill of Rights.

4. Close Guantanamo – not just the prison, but the entire naval base, and hand it back to Cuba, as part of an unconditional normalization of relations with that country. Release all prisoners against whom the US has no evidence, which, according to terrorism experts, would be all but a handful.

5. Announce your intention to veto any extension of the USA PATRIOT Act or the NDAA.

6. Normalize relations with Iran, and end sanctions immediately in return for thorough and frequent inspections of nuclear facilities.

8. End all US aid to and special bilateral agreements with the apartheid regime in Israel. Prohibit all US arms sales until illegal settlers are removed from Palestinian land. Alternatively, all Arabs, including those in the occupied territories and refugees living abroad, should be granted full rights and equal status with Jewish citizens.

9. Abandon the “Pivot to Asia.” Support negotiations between China and its neighbors to fairly divide claims to the Senkaku Islands and mineral rights in the South China sea.

10. End all sanctions against Russia and invite them to talks between the Kiev government and rebels in Donetsk and other Russian speaking areas. Support the notion of Ukraine as a neutral, decentralized buffer state with good relations with both Russia and the EU. Recognize the annexation of Crimea as consistent with Russia’s historic claims to the region.

Contrary to the assertions of the corporate-owned media, all of these actions would have substantial public support, some of them overwhelming majorities. I assure you that if you take even one of these actions, everyone, including Republicans, will have to admit you have the cojones. Furthermore, the United States would no longer be seen as the bully of the world, but would once again be “the shining light on the hill.”