In the wake of the controversy over Russia’s intervention in Syria, many of you may have overlooked the controversial events in the South China sea. As usual, our overlords on the Potomac are outraged whenever anybody anywhere takes the initiative without saying “Uncle may I?” The corporate media echoes their allegations that China is a horrible aggressor for reclaiming reefs to create island bases. Not so; China’s island-building is not only justified, it’s awesome!

Normally I don’t support anything governments do, which mostly involves killing people and breaking things. Even when in their constructive mode, they use resources stolen from the people by taxation. Sometimes, however, they create things impressive enough to almost make us forget that: the Pyramids, the Great Wall of China, the Netherlands’ dikes and polders, the Trans-Siberian railway, the International Space Station, and the Suez and Panama Canals. These are astonishing feats of human endeavor, even if some of them used slave labor or forced peasants from their homes.

China’s man-made islands are similarly impressive, and more compatible with libertarianism than many of the other examples. As John Locke advocated, the Chinese are mixing labor with nature to create property. Several Asian nations claim the Spratly Islands, but only the Chinese have done anything significant with them,

The fact that China’s actions are self-interested doesn’t make them wrong. They’ve created several thousand acres of new territory, always helpful for an overpopulated country. Secondly, they’ve established a claim to the surrounding seas for future extraction of oil and gas. Most importantly, they’re building bases to safeguard the free movement of goods through these strategic sea lanes. Washington’s claim that this threatens freedom of the seas is Orwellian nonsense, because only the US habitually slaps blockades, embargoes and sanctions on countries that defy its dictates. China depends on trade for its survival; these bases are a kind of insurance policy.

Contrast China’s activities in the Spratlys to similar projects by America. On Diego Garcia, a remote island in the Indian Ocean, the US built a massive military installation and expelled the entire native population. In the US Territory of Guam, the Pentagon blocks the Guamanians’ requests for increased autonomy. The natives mustn’t have a say in the scope of military operations on their islands.

Furthermore, if China’s claim to the Spratly reefs is recognized internationally, private projects might fare better in the future. In 1972, a group of American investors tried to establish a libertarian nation on the Minerva Reefs in the Pacific, but the neighboring Kingdom of Tonga invaded and stole the fruits of their labor. Hopefully China’s actions will also weaken the Communistic “Law of the Sea” treaty, which restricts development by defining the oceans as “the common heritage of mankind.” Finally, if humans are ever going to colonize the asteroids or terraform Mars, we need to start somewhere. As the proverb goes, even the longest journey begins with a single step. 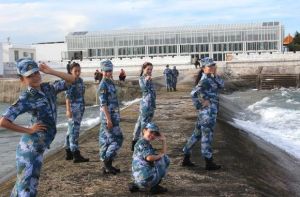 The accompanying picture is from http://slide.mil.news.sina.com.cn and shows personnel on Fiery Cross Reef AKA Yongshu Island. Here’s an unrelated question for you military folks out there: though the female sailors look adorable in their blue camouflage uniforms, what’s the purpose? People don’t fight battles in the water, except as“frog men” (or should I say “frog persons?”)

Sources: zerohedge.com, wikipedia.org and heritage.org. Image at the start of the article is a LANDSAT-7 image of Fiery Cross, from April 2000. How things have changed!