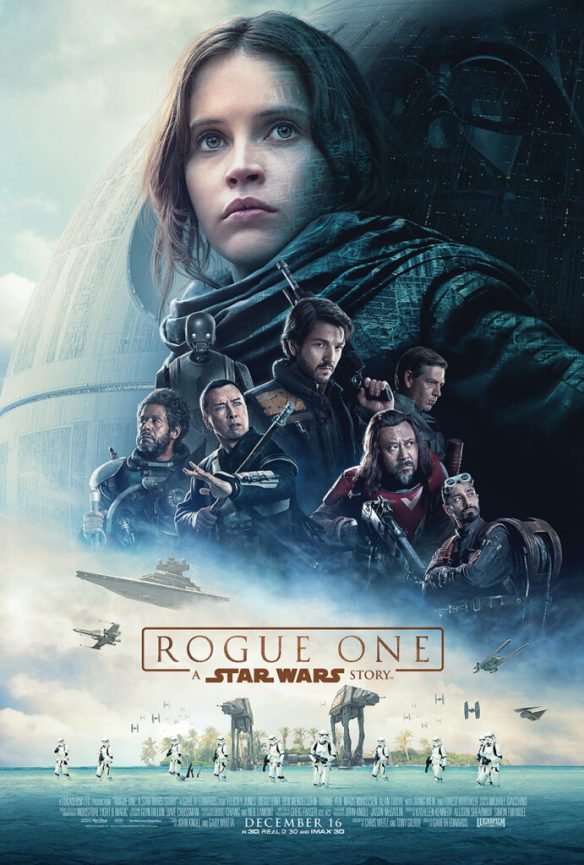 Rogue One: A Star Wars Story

Rogue One was a pleasant surprise. I must admit that my expectations were low, due to the disappointment that was The Force Awakens. I hadn’t been paying much attention to the media, so going in I didn’t know where it fit in the Star Wars time line. Though it’s being billed as a “stand alone” film, Rogue One fills in the gap between the 1977 first movie (also known as Episode IV) and Revenge of the Sith (Episode III.) It’s exciting, action-filled, and best of all, it’s original.
The screenplay was written by Chris Weitz and Tony Gilroy, based on a story by John Knoll and Gary Whitta. Yet another director, Gareth Edwards, takes the helm for this installment, and he does an impressive job. The story line is fairly straightforward: the characters find out about an insidious Imperial plot to build a “planet killer,” which turns out to be the original Death Star.
One of the more satisfying things is how the movie explains one of the most glaring flaws in Episode IV: why does the Death Star have an explained weakness?
Like the force awakens, there’s a spunky female protagonist, Jyn Erso, played by the always delightful Felicity Jones. Unlike Force’s Rey, Jyn doesn’t benefit from a sudden unexpected blossoming of Jedi powers. She has to use her brains and daring to achieve her goal, to steal the plans for the Death Star.
It also introduces an endearing non-human character: the cynical android K-2SO voiced by Firefly alumnus Alan Tudyk. Maybe this is because, as our society becomes more automated, we need to give machines a personality.
According to Wikipedia, one of the film’s controversial aspects was the use of computer-generated imagery to portray the deceased actor Peter Cushing, and to show Carrie Fisher as a much younger woman. I expect we’ll see a lot more of this in the future.
I’d also like to comment on another controversy that’s arisen in the alternative media: that Rogue One serves the “social justice” narrative by casting non-white and Hispanic actors (such as Diego Luna as Cassian Andor) in the heroic roles, while the bad guys are all white. If this was indeed a goal, it didn’t detract from the movie. After all, the Star Wars saga is supposed to take place “long ago in a galaxy far away.” The fact that the characters are even human is one of those unexplainable coincidences of science fiction.
I’d like to close this review by wishing the great Carrie Fisher a speedy recovery from her recent heart attack.

If you like science fiction, you’ll enjoy my novels and stories on Amazon.