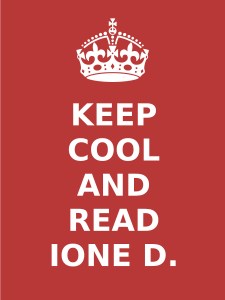 When I was a kid growing up in North Dakota, winter was the best time for reading a good book. Here in Arizona, however, the summer is the miserable season. This June has been a particularly hot one, with the temperature hitting 120. So when you’re lounging around in your air-conditioned house, what’s good to read? You’re in luck because Arlys and I are offering our e-book Professor Ione D. and the Epicurean Incident for FREE on Amazon this coming July and August. And if you happen to be attending Westercon 70 at the Tempe Mission Palms, come see us on our steampunk-related author panels on 11 AM Sunday and 5 PM Monday. 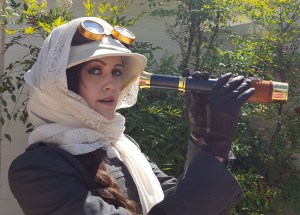 Time marches on. I have long last begun the formatting of Miss Ione D and the Mayan Marvel, my first literary collaboration with Arlys Holloway. Although the novella has been available in e-book format since May, it doesn’t seem quite real to me until I have a paper copy I can hold in my hands. This edition will be supplemented with chapter illustrations by Ben Gill, a very talented local artist we met while working on our play in conjunction with Phoenix Pride.

It’s exciting to take another step toward bringing these stories to life. Someday, perhaps we can find an artist with the time and inclination to work with us on a graphic novel version. For the author, it’s akin to writing a script, complete with scene direction. Artistically, it’s a much larger amount of work, which is why graphic novelists often outsource the inking and shading to a country with lower wage rates. We sure hope the Donald doesn’t find out, or we may be in trouble! Seriously, though, from the comic, it’s a short hop to a full-blown animation, which has always been a dream of mine. How about a score by steampunk luminaries such as Abney Park or Steam Powered Giraffe?

While we do that, we’re also editing the second book in the series, Professor Ione D and the Epicurean Incident, which takes place in London in 1901. Our progress has been slowed a bit by the demands of our day jobs. Hopefully, we will both have more free time after the holidays.

In honor of this next step, we have declared a fiction giveaway contest. No money is required; all you need to do is like and/or share the relevant post as it appears on my Facebook author page today December 4th, or last Sunday’s post (it’s a Steampunk Christmas) in which we first announced it. All who do so between now and December 11th will be entered into a random drawing. First prize is a free novel in paperback form, either my steampunk novel Fidelio’s Automata or my earlier work, Centrifugal Force. There will also be five second prizes of a free e-book download from our works listed on Amazon. For the paperback, we’ll need to have your physical address of course, but don’t worry, we won’t spam you and we never share that information. (Due to the high cost of overseas shipping, US addresses only please!) 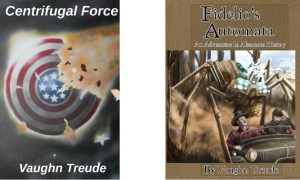 The US Senate recently passed the so-called “Marketplace Fairness Act,” which mandates that Internet retailers collect sales taxes from their customers and remit these amounts to those states that charge them. The argument is that the current system, in which out-of-state sales taxes are virtually un-collectible in many situations, is unfair to traditional brick and mortar businesses, is hogwash. The real reason is greed. State and local governments have spent themselves deep into debt, and are looking for a way out. They don’t deserve one.

This law now goes to the House, which may or may not pass it, but it’s likely to pass both houses of Congress in some form eventually. You can be certain that the President, be he our current “socialist” or a potential “free market” Republican successor, will have no trouble signing it. That is unfortunate. This is one few cases of “states rights” that the Federal government should oppose.

Sales taxes have gotten completely out of hand, soaring to 10 percent or more in many areas. Local politicians have used deception to gain the acquiescence of the public, promoting this boondoggle project or that, raising the level of theft a penny at a time. Many of these taxes were supposed to be temporary, but keep being renewed when the roads, schools, or parks in question encounter the inevitable cost overruns. Sometimes these taxes fund “development” projects such as professional sports stadiums, which invariably fail to deliver the economic benefits their proponents fraudulently predicted.

Besides being used to fund wasteful projects, sales taxes are also highly regressive. They hit the poor and the elderly on fixed incomes the hardest. In a time of economic downturn, this is a powerful argument for decreasing them. Exempting Internet transactions completely from sales taxes would give states and cities a good reason to reduce or eliminate this onerous form of plunder.

Extending tax collection to all Internet businesses, even tiny ones, will be a heavy burden on commerce that does NOT fall on brick and mortar stores, which only need to collect for their local jurisdiction. I expect that “sales tax collection services” will spring up around the country, and that they will impose a significant cost on small business, over and above the taxes themselves. I also predict that members of Congress, who are largely exempt from the insider trading laws that plague private investors, will be heavily invested in these business, just as former Homeland Security Secretary Michael Chertoff invested in airport X-ray machines after 9-11.

People who know me may be shocked that I suggest that Congress take any sort of action at all, but in this case I part from my usual anti-Federal prejudices. Congress should use its power under the Commerce Clause to completely ban the so-called “use taxes,” which allow states to levy sales taxes on transactions conducted outside their borders. Such a law would have the happy effect of abrogating recent state agreements that require Amazon to collect taxes in jurisdictions where it has no physical presence.

And what of the affected states and municipalities? They will be forced to make deep cuts in spending, as well they should. These cuts should start at the top, slashing salaries of governors, department heads, mayors, city managers, and the administrators of school districts as well as fire and police departments. In many cases “public services” will need to be cut. Sweetheart contracts with public employee unions in states like California can and must be broken. In other cases, cities will declare bankruptcy. This should be viewed as a normal and necessary check on the ability of local governments to over-spend. Once bond-holders start to lose money on these allegedly risk-proof “investments”, they will think twice, and investigate a city’s fiscal responsibility before doing so again.

Incidentally, the idea that states “need” to collect this money is disproven by the fact that North Dakota, a state with full coffers due to is oil boom, continues to collect “use taxes” on Internet transactions. Furthermore, though I oppose taxes in principle, if sales taxes were to drop to 3% or less, they would have little or no effect on physical businesses. Local shopping has its own advantages, which include immediate gratification and saving on shipping costs.

Brick and mortar merchants may see a tax-free Internet marketplace as unfair, but this does not mean they have the right to equalize their misery. They should instead agitate to reduce or eliminate the outrage that is sales taxation.