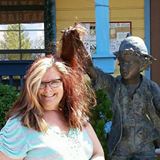 For Valentine’s Day I thought I should write about hearts and flowers, but the closest topic I could come up with was collaboration. Seriously, it’s a lot like a romantic relationship. When we consider the famous creative duos, such as Lennon and McCartney, Rodgers and Hammerstein, and Cheech and Chong, we can see that a creative partnership is a lot like a marriage, with interpersonal drama, conflict and compromise. Some teams are tempestuous and brief, and others last a lifetime.

As for me, collaboration has rarely worked. Most of the time the chemistry just isn’t there. Some people aren’t committed and don’t pull their weight; I had a high school debate partner who was like that. Others are overly invested in everything, and argue or take offense at constructive criticism.

The best partnerships are those that happen naturally. In grade school, my best friend was Joel, who shared my bizarre sense of humor. We were doing “Mad Libs” before it was popular, as we started our story-writing by crossing out and replacing words in old textbooks. Nothing we wrote was anything someone older than 12 would find appreciate, but still, we had a hilarious time doing it.

Besides co-writing those dumb stories, the closest I’d come to collaboration was my participation in writer critique groups. Not all personality types are suited for this. People who are overly sensitive or argumentative usually quit after one or two meetings. A fragile ego is fatal to creativity, because being open to honest feedback is essential to learning and growth. At the same time, one can’t be too indecisive, because critics will sometimes have opposing opinions. To be truly creative, you need a vision of what you’re trying to accomplish.

The best partnerships are those in which the participants have differing strengths. That’s why Elton John writes the music and Bernie Taupin does the lyrics. I’ve had the exceptional good luck to find a creative partner who does just that, complementing my own skills. It’s even more unusual to find that sort of thing within a romantic relationship.

Arlys and I began our creative partnership by an interesting accident of fate. My friend John from the sci fi writer’s group invited me to accompany him to a meeting of a theatrical group. They were an interesting bunch. Many of them were adapting excerpts from their own novels or short stories for the stage. Under other circumstances, I would probably have not continued, because my own work didn’t seem well-suited for that purpose.

But then I thought of the stories Arlys had told me, of all the odd and quirky characters she’d met through on-line dating. One of those guys was a “furry,” who liked to dress up as an animal. To most furries, it’s a fun costume to wear to sci-fi conventions and other get-togethers for some innocent role-playing. For others, and this fellow was one of them, it’s a sexual fetish. Arlys found the idea ridiculous, and did not see that guy again, but to me it was hilarious. I thought, why not do a musical number where the actors danced around and sang about the joys of sex in a fur-suit? That was how “One Good Man,” our musical comedy about on-line dating, was born.

So far, Arlys and I have co-written half a dozen scenes of our show, three of which were staged as part of the “Out Loud” showcase here in Phoenix. A fourth is scheduled to be performed next month for “Out Loud” number two.

Since then, she been the first person to read and critique all my writings. As a collaborator, Arlys has many strengths that I lack. She’s a wizard with dialogue, and far better than I am with jokes. She brings the woman’s perspective that we men find difficult to write. Her sense of style caused her to fall in love with the steampunk movement, which was the genre of my second novel, Fidelio’s Automata. Some of her artistic creations have helped inspire new stories. She has given unconditional support to all my ventures, and that means the world to me. And so does she.