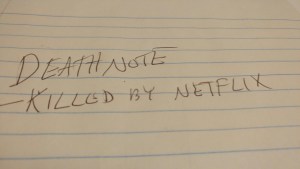 It may sound morbid, but “Death Note” is one of my favorite stories. I’ve experienced it in every form: the manga, the anime series, and the Japanese live action movie. I was excited to see the American movie version, a Netflix production, so I watched as soon as it was available. I was gravely disappointed within the first five minutes.

For those who aren’t familiar with it, Deathnote is based on a manga written by Tsugumi Ohba and illustrated by Takeshi Obata. Shortly before his high school graduation, Light Yagami finds a magical notebook labeled “Death Note.” It’s a supernatural prank by a shinigami (Japanese “death god”) named Ryuk. The book’s instructions say that anyone whose name is written within will die, at the time and by the method specified. Ryuk (a Joker-like winged demon in Goth attire) appears and encourages Light to try it out. Light tests the notebook by writing the name of a hostage-taker from the evening news. The criminal drops dead. Light decides he’s been chosen to rid the world of evil-doers.

This power, even in the hands of an upstanding young genius like Light is an insidious thing. It takes him down a dark path much like Walter White in Breaking Bad. Eventually, the media notices the mysterious deaths and dubs the anonymous executioner “Kira” for “killer.” To the public, he’s a vigilante hero while the authorities view him as an existential threat.

This theme of hubris and corruption plays out through 12 volumes of manga and 37 episodes in the anime adaptation by Madhouse. One of its most popular aspects was the game of wits between Light and “L,” the autistic savant teenage detective the authorities hire to stop Light’s reign of terror. Some viewers felt the show drags in the final season as Light eliminates the investigators one by one, sparing only the police chief, who happens to be his own father. I disagree. The latter episodes are as intense as the early ones. You can feel the desperation of the police as they face down Kira’s supernatural power.

Just as the smash-hit anime series was drawing to a close, Japanese director Shūsuke Kaneko converted Death Note into a pair of live-action movies. Because of the time limitation, he shortened and rearranged the story. Though purists hated these changes, I felt that the movies stayed true to the spirit of the original. Casting was superb, especially with Tatsuya Fujiwara and Kenichi Matsuyama as Light and the eccentric candy-devouring L, respectively. (By the way, Matsuyama appears in an alleged sequel, L– Change the World, with Matsuyama as L in one of the worst movies I’ve ever seen.)

Three Versions of Light versus L

Not so for the Netflix remake directed by Adam Wingard, which makes far more significant changes. Rather than being a “goody two shoes” from an upper-class family, Light Turner (played by Nat Wolff) is a rebel with a tragic backstory. His mother was killed by a criminal who escaped justice, predisposing him to a vigilante mindset. Though he’s smart, he’s already dishonest and gets caught selling homework to his classmates. Apparently, the American script writers thought it needed “girl power.” In this new version, Light’s girlfriend Mia (Margaret Qualley), a clueless pawn in the original, becomes Light’s co-conspirator right from the start. She’s the one who insists on killing the FBI agents who threaten Kira, while the American Light (unlike his ruthless Japanese counterpart) refuses to do so. These changes confuse and muddle Death Note’s message. Worse yet, there’s no time for the famous sparring between Light and L. Early in the movie, L confronts Light at a coffee shop, saying, “I know you’re Kira.” How? What investigation has he done? Even the ending has major changes. I won’t spoil it, except to say there’s a lot less death in this Death Note.

That said, there are some good points. I enjoyed Willem Dafoe as the voice of Ryuk, though the new CGI rendering makes him more of a demon than the trickster he was in the original. Lakeith Stanfield was also excellent as the eccentric “L,” though the script has him acting out of character at the end. I also must admit that the final plot twist surprised me, perhaps because my expectations had dropped so low.

To summarize, if you’ve seen the original Death Note, you might want to skip this train wreck of a remake. If not, you might not necessarily hate this version, but please don’t judge the rest of the franchise by it.

Note: While researching this article I became aware of a second Japanese live-action Death Note sequel called Death Note: Light Up the New World, directed by Shinsuke Sato. With some trepidation, I plan to see this one as soon as I can.