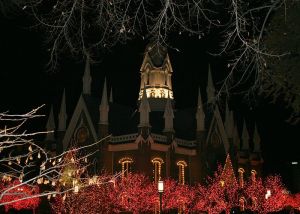 When I heard that Matt Stone and Trey Parker of South Park fame were doing a musical comedy based on the Book of Mormon, I had high expectations. This week I finally saw the show, and they did not disappoint me.For those who don’t know, the play is the story of two American Mormon missionaries who are sent to Uganda. One is a narcissistic over-achiever, the other an Asperger-ish compulsive liar. This, combined with the hellish conditions and cynical inhabitants of the village they’re sent to, makes for some very hilarious and un-PC hijinks.

It’s interesting, when you’ve been listening to the sound track for a long time, to see what the actual show is like. I ended up going twice, because my girlfriend Arlys’ employer changed the date of a conference we’d been planning around. Rather than trying to sell the original tickets and risk not seeing it at all, we bought two more. On Tuesday night I saw it with family, and on Thursday with Arlys. Both times it was fantastic, with top-notch acting, singing and dancing. Seeing it a second time was an opportunity to notice the details and laugh at the jokes I’d missed the first time. Not that I’d have gone twice otherwise, because even high in the second balcony, the tickets weren’t cheap.

I realize that all traveling Broadway shows are pricey these days. It’s just a shame that when a show appears on a college campus (the Gammage at ASU) that the students can’t afford to see it. My son, an ASU freshman, was one of the lucky ones. I didn’t notice too many other people his age when we were there. In any case, the performers all did an excellent job and deserved to be well paid. They were accompanied by a top-notch live orchestra. It’s worth noting that Parker and Stone are among the world’s richest comedy writers (at least, according to one of those Internet “top ten” lists.) I sure wouldn’t complain as the money rolled in.

The Book of Mormon is probably the most politically incorrect musical to ever win nine Tony awards. Besides plenty of vulgar language, it lampoons a major religion, albeit a religion that’s overwhelmingly white and conservative. It gets an equal amount of comedic mileage from the horrible problems of modern Africa – war, famine, AIDS, and female genital mutilation. To the writers’ credit, they didn’t throw in any lines that blamed this on the white man. They did, however, have the African characters complain that foreign missionaries would tell them lovely stories and then leave without fixing anything. The part about an insane general trying to force circumcision upon helpless women was probably furthest from reality. From what I’ve heard, African women are usually the ones who are the most adamant about subjecting their daughters to this barbaric practice.

It was fascinating how much actual Mormon / Latter Day Saints doctrine made its way into the show. The opening historical background sequences reminded me of time long ago when I went to the visitors’ center of the Mormon Tabernacle in Salt Lake City (or Sal Tlay Ka Siti, as the Africans call it.) Of course, it’s all presented in a satirical, cartoonish fashion. My favorite song is “I Believe,” in which Elder Price begins by singing about the standard Christian dogma we all know – that God created the universe, that Jesus died for our sins, that there’s some good in everyone. He continues with the more unusual Mormon beliefs – that ancient Jews sailed to America, that God lives on a planet called Kolob, and that in 1978, God “changed his mind about black people.” Another of the best musical numbers had the sci-fi obsessed Elder Cunningham being chastised by Joseph Smith, Lt. Uhura, hobbits, and Yoda.

I’ve heard very little about LDS reaction on the show, which seems to portray Mormons as well-intentioned but bumbling do-gooders. When I first heard of the show a few years ago, the reviewers claimed that it was popular among younger Mormons, though I personally don’t have any close friends in the church I’d feel comfortable about asking. I definitely wouldn’t recommend the show to anybody who’s offended by profanity, sexual humor, or mockery of religion. To everyone else I say, for Christ’s sake, see it!

(Picture of Salt Lake Assembly hall is from Wikimedia Commons.)